Nuclear Medicine Europe (ex AIPES) is a European Industrial Association working on promotion, awareness and defence of Nuclear Medicine and Molecular Healthcare in Europe. We are active in the field of Imaging and Therapy with Molecular and Radioactive Tracers. The main objective of our association in this field is to ensure the promotion of the economic and/or commercial interests of its Members, in particular, by all means allowing to increase the awareness to the benefits of the products and services they offer.

In addition to the main activity described here above, our association may represent the common interest of the Members in relation with the European Institutions, with other national and international authorities and in dealing with other scientific, educational or professional association groups or societies, such as EANM, EFPIA, CERN.

The Association does not interfere in the activities of its Members.

Our Objectives:
1. Foster Innovation in nuclear medicine and molecular imaging;2. Cooperate for appropriate regulations in all aspects of nuclear medicine missions;3. Support and facilitate logistics and operations needs of our members;4. Promote the value of nuclear medicine achievements;5. Harmonization through Europe;6. Simplification of rules and procedures.

NMEU Position on Radiopharmaceuticals: Three Pillars to Drive our Actions:

Full compliance: adoption of all relevant requirements, both on radioactivity and pharmaceuticals Compliance covers the entire process: from R&D, to manufacturing, to distribution, to any after sale events

Tradition of innovation and commitment to novel, future tracers Development of new drugs will require a more tailored regulatory approach

Ensuring products and technology availability for millions of procedures all over Europe.

The members of the Grouping can, by a written resolution taken by unanimous consent, take all decisions which are subject to the General Meeting, out of a meeting, except for those decisions for which the adoption before a notary must be provided. Following the adoption of a resolution, the Executive Committee shall ensure that the statutory filing requirements are complied with.

The representatives of the 2022-2025 NMEU General Assembly are :

Erich Kollegger took over the General Management of the Institute for Radioelements (IRE) and its subsidiary IRE Elit early 2018. Engineer in Electro-Mechanics by education, his professional experience includes Project Management, as well as Production and Plant Management in chemical and pharmaceutical plants, in Belgium and France. Before joining IRE, Erich was Plant Manager of a manufacturing site for Baxter Healthcare in Lessines, Belgium. Erich is also Chairman of the Board of Directors of Transrad, a company specialized in transport of radioactive material, and represents IRE as director of Sterigenics and Oncidium.He is appointed lecturer at the Universities of Liège, Brussels and Louvain-la-Neuve in Belgium, being in charge of a course on Business management.

Guy Turquet de Beauregard, who has been a member of the Executive Committee since 2008 and President of AIPES from 2013 to 2016, devoted his professional life to nuclear medicine and has always been a strong supporter of our industry became AIPES Honorary President. AIPES continues to benefit from his valuable advice and contacts in the scientific and political world.

Rudi Verbruggen holds degrees in radiochemistry, biomedical engineering, and business management. He joined the nuclear medicine world immediately after university, first for SPECT and then for PET imaging. After some years in R&D and product development of nuclear medicine in South Africa, he held project management, sales/marketing, business development and management positions in major companies within the radiopharmaceuticals and medical devices industries. He gained worldwide experience and since 2013, he is involved as a senior business development consultant for several molecular imaging business companies. His involvement with AIPES/Nuclear Medicine Europe started in the early ’90s when AIPES was founded, and he represented afterwards several companies within NMEU.

The administration office, based in Brussels, is in charge of coordination between stakeholders, and acts as a liaison office and an information platform between the Group and the other European entities.

David Crunelle is a multi-award winning designer specializing in visual communication. He taught communication in higher education for more than 10 years, he is a photographer for Getty, KOL and influencer for several tech brands, and is recognized in the contemporary artistic world. In addition to being a consultant for more than 35 European associations, he has worked closely with AIPES/NMEU since 2008.

Bram Van Malderen joined the Brussels office of Nuclear Medicine Europe in 2022 and is responsible for office management, administration, corporate activities, and the working groups.

Prior to joining the association, Bram has worked for more than a decade in an international environment and in close contact with the EU institutions, gaining extensive experience in office management, (financial) administration, membership relations and event organization, as well as in strategic thinking, project management and change management.

He holds a master’s degree in multilingual communication (2008).

Based in the NMEU Executive Office – Brussels since 2006, Jocelyne Baldasso is in charge of the coordination and communication for the European activities and the management of the financial operations of the Association.
Jocelyne has an extensive experience at corporate, governmental, and executive levels within international companies and European Associations. She holds a degree in psychology of sciences of human behavior (awarded in 1998).

The sensitive nature of NMEU activities for the public, (i.e. human healthcare issues and radioactive hazards fear), implies at any time the risk of being the target of public inquiry and questioning. Moreover, NMEU wants to promote fair competition between its members. NMEU members should therefore at least fully comply with the EU and International legislation and principles related to:

Emanating from the first clinical use of nuclear medicine tracers and therapeutics in the 1950s, a clinical discipline and supporting industry began to emerge during the 1970s in the United States, Europe and Japan. By 1985 this activity was considered appropriate for regulation by the European Union, and a Directive bringing radiopharmaceuticals in line with all other drug substances was introduced.

In 1987, all interested radiopharmaceutical companies agreed to form the Association of Radiopharmaceutical Producers Europe (ARPE) which was formalised shortly afterwards as a European economic interest group (EEIG).ARPE’s initial focus on pharmaceutical regulations was very successful and led to an agreement with the EEC for rational registration process. In addition to these activities ARPE also became a focal point for dealing with threats to the continuing success of radiopharmaceuticals in Europe. For example, a threat to disrupt supply of a key raw material in the production of radiopharmaceutical preparations was addressed by focussed lobbying with governments, regulators and industrial partners.

By the mid 1990s the professional organisation representing nuclear medicine physicians in Europe (EANM) provided an opportunity for ARPE to become directly involved in a strategic collaboration to develop the speciality. In order to appropriately respond to this challenge, ARPE broadened its statutes to encompass hardware and equipment companies and renamed itself the Association of Radiopharmaceutical Producers and Equipment Suppliers (ARPES). ARPES was closely involved with several EANM projects including the funding of a cost benefit study for nuclear cardiology and a contribution to the establishment of a strategic vision for nuclear medicine in Europe. By the end of the 1990s most members had broadened their scope and were now engaged in multi-modality in-vivo diagnostic activities.To reflect this reality a new name AIPES (Association of Imaging Producers and Imaging Suppliers), with the mission to foster industry collaboration across all fields of in-vivo diagnosis, was adopted in 2001.

During its relatively brief history our industry association has experienced massive technological, commercial and regulatory change. Despite this change, our members remain committed to providing the highest standards of product and service excellence to physicians worldwide and ultimately the patients that they serve.

In May 2019, AIPES changed its name and visual identity to become Nuclear Medicine Europe. 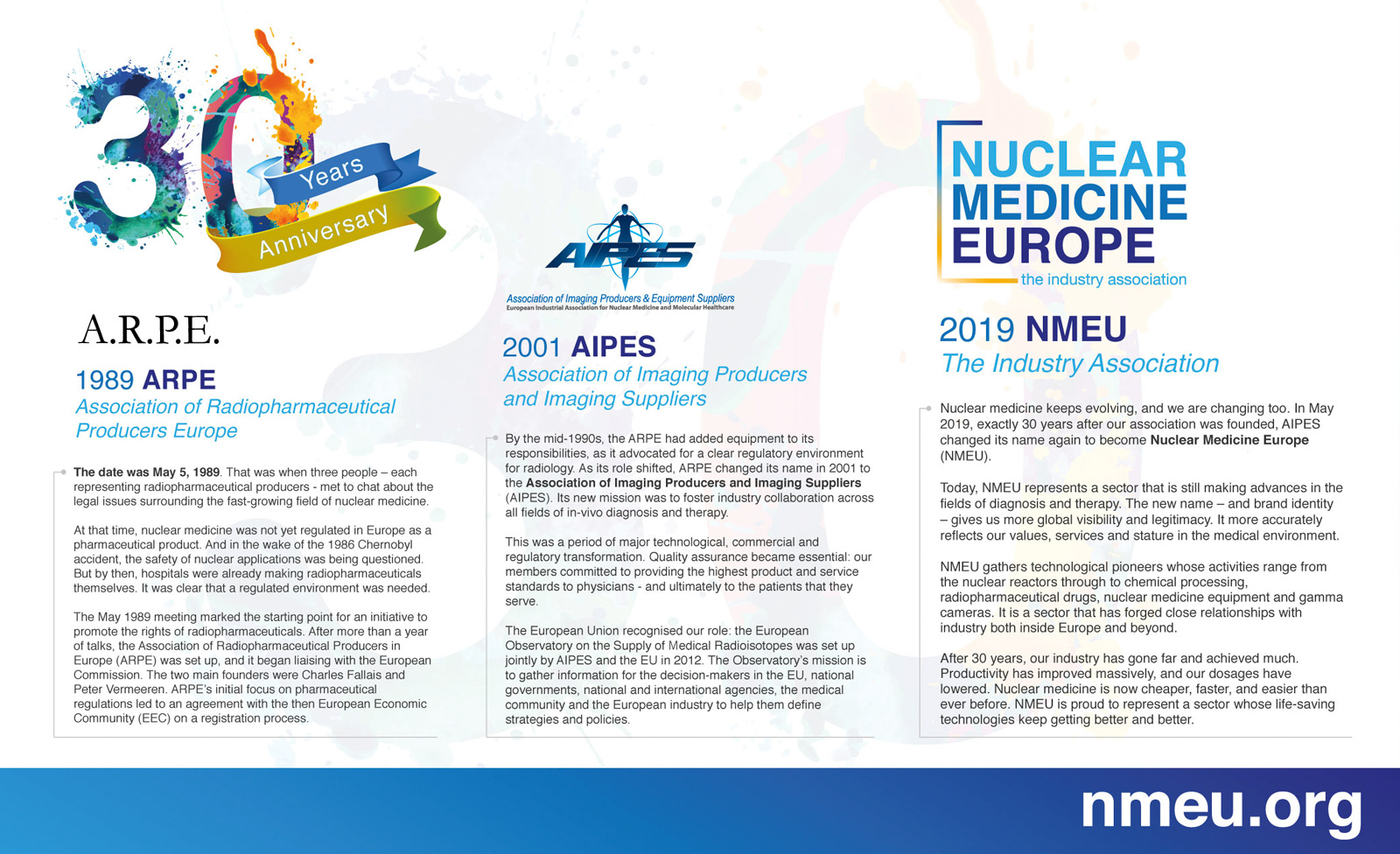